We Did It!! – Introducing the Photostock Workshop!

Looking at the last post made back in January of this year, it is hard to believe all that has happened in the time since. At that time I was still dreaming of a workshop facility on my Northern Michigan property and exploring ways to get it funded. 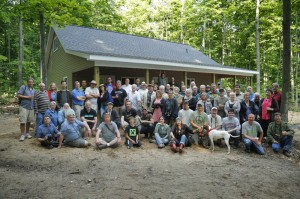 Then came the Kickstarter campaign and the rest is history. Little did I know that less than six months later, I and about 75 friends and supporters would be celebrating on its porch! June 22, 2013 was the official dedication party and we made it just in time.

The exterior of the building has now been completed according to the original plan and we have gone well beyond that with the interior well on its way to completion. What is more, we have already held 2 successful, sold-out workshops with even more planned for the next year!

I have to say that it has changed life as we knew it around here. It has been a full time job since reaching our funding goal in less than 2 weeks.

I’ll spare you all the details, but between builders, inspectors and sweat equity, it has been quite a ride. In fact, it continues and although behind schedule, I am well on the way to completing all of the pledge rewards for the kind souls that contributed to the project. If you’re reading this and contributed to the project, you either have had, or will soon get your reward.

There are a lot of good times and great workshops to be held here and I look forward to getting everything up and running for the 2014 season. If not already on the subscription list, please sign up in the right-hand column. You’ll receive all updates and announcements.

Thank you so much!

On the Beach #reynisfjara #iceland